When you book with an account, you will be able to track your payment status, track the confirmation and you can also rate the tour after you finished the tour.
Sign Up
3546

Why choose us for organizing your trip?;

Feel free to call us. We can help with any of your queries.

Knossos palace the most visited archaeological site  in Crete. Discover the most well know myths about the Minotaur and the Labyrinth while walking through the history of the Minoan civilization.

Archanes, a market town nestled in the broad upland east of Mount Juchtas, the God Zeus has been immortalized in the profile you see etched against the clear blue Cretan skies.

Epanosifi monastery, one of the largest and richest monasteries on Crete.

St. Thomas (Agios Thomas), a village  carved into the rocks!! 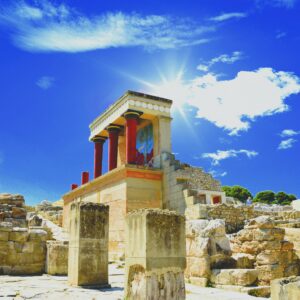 Knossos palace is Crete’s most visited archaeological site.Discover the most well know myths about the Minotaur and the Labyrinth while walking through the history of the Minoan civilization. The first excavation of the site was conducted in 1878 by Minos Kalokerinos of Herakleion. This was followed by the long-term excavations 1900-1913 and 1922-1930) of the Englishman Sir Arthur Evans, who uncovered virtually the entire palace.While walking through the palace one can admire the Frescoes,pottery and the Throne room. This great civilization was destroyed at the explosion of the volcano of Santorini island. Entrance fee 15€ pp

The tour continues through the island’s hilly countryside, filled since 4000 years, with the olives orchards and most famous vineyards, before arriving at the village of Archanes, just 10 km south of Knossos palace. A market town nestled in the broad upland east of Mount Juchtas, the God Zeus has been immortalized in the profile you see etched against the clear blue Cretan skies. You will stop in this beautiful village with many restored sandstone houses from the Turkish period and an inviting square with high shady trees, for a coffee. The village people are proud of their successful efforts to keep the village alive, clean, traditional and beautiful. They are also genuinely friendly. Archanes has won awards – 2nd best restored village in Europe and 1st in long term development prospects. Streets have been newly stone-paved, there are more splendid displays of blooming flowers, fruit trees and plants in the yards, terraces and balconies of the houses – a walk around the back streets is a pleasure as a result.

This is one of the largest and richest monasteries on Crete. It flourished during the era of Ottoman rule and is dedicated to Saint George. The structure of the monastery is reminiscent of 17th century secular Cretan architecture with independent cells, one built next to each other. The Refectory and the priory are located west of the church. The surviving manuscripts, dating back to the 18th century onwards, prove that this was the greatest period of flourishing for the monastery, during which it was one of the premier intellectual centres of the island.

Owner’s grandfather, planted the first vineyards in 1906. At that time he would use the Minoan dressed stone treading tank that used to be at the village of Agios Thomas, where he came from, to tread the grapes. The must was fermented into big storage jars. He transported the wine into leather flasks and he sold it to taverns and stores. Some years later he settled down at Vorias, a village 15km away from Agios Thomas where he planted new vineyards. He used to take the grapes to well known wineries. In 2001 the vineyards became part of the organic cultivation system, as the organic products protect the environment from the pesticides’ contamination as well as the consumers, the cultivators and our children. In 2004  family set up a most modern winery into the vineyards. Every stage of the winemaking  from the production to the bottling, is done in  verticalized, modern unit.

Guided tour in winery and tasting of 3 labels accompanied with cheese, small tomatoes, and baked bread.

Α village  carved into the rocks!! Agios Thomas is a place with an imposing landscape, dense vegetation and a magnificent view. The carved winepresses, the Roman tombs, the Melissa fortress, the unique laurel forest, the monastery of Panagia Kardiotissa and 49 churches and country churches create a wonderful puzzle, the village of Agios Thomas. The village is 30 kilometers from Heraclion and built between giant, steep rocks, 530 meters above the sea level.49 churches and country churches are in the settlement. There are a lot of visiting churches in the village as Agios Thomas, Archagel Michail, with the archaic frescos of the 12th century, the monolithic carved temple – unique in Greece – dedicated to St. Joasaf prince of India. You can also visit the carved church of Kera Spiliotissa,. According to the tradition, there was a theatre and an ancient altar, while out of the cave, there is an ancient, Greek inscription carved on it. In Spiliotissa, there is the hole of Hades – now it is concrete. The entrance to the Underworld is said to be there and that is why people threw tributes and some of the favorite objects of the deceased in it. Also there is a traditional Cretan tavern where you can enjoy Cretan delicacies with a unique view of the Cretan Nature.

Attention: The excursions will be carried out following the current developments and always with the advice of the experts and the protection measures covid-19 that we are all obliged to follow, in order to be safe.

This website uses cookies to improve your experience while you navigate through the website. Out of these, the cookies that are categorized as necessary are stored on your browser as they are essential for the working of basic functionalities of the website. We also use third-party cookies that help us analyze and understand how you use this website. These cookies will be stored in your browser only with your consent. You also have the option to opt-out of these cookies. But opting out of some of these cookies may affect your browsing experience.
SAVE & ACCEPT
Powered by